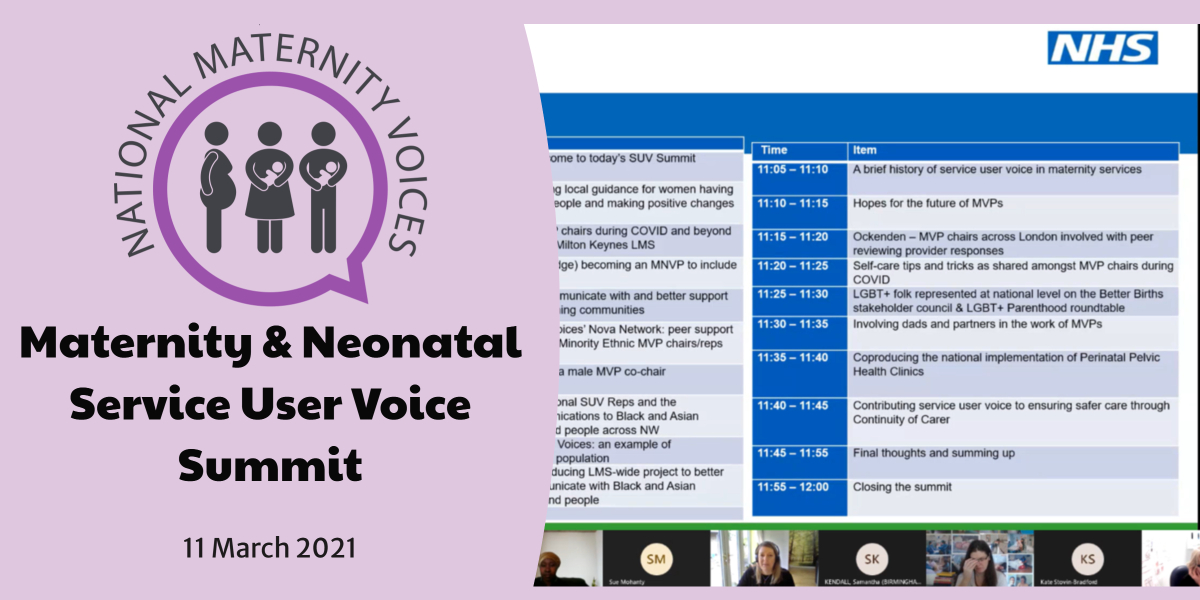 NMV worked with NHSE/I, alongside MVP Chairs and SUV Reps in the event planning team to coproduce the Summit; particularly focusing on hearing from voices that are not often heard. Other MVP chairs and SUV reps had the opportunity to share what they were interested in hearing about at the Summit and to nominate projects and relevant pieces of work to showcase.

With so much to share within a  limited amount of time, the Summit was a whistle stop tour of inspiring service user-led coproduced pieces work, through 17 presentations by MVP chairs, and Regional and National SUV reps. This included ‘a brief history of service user voice in maternity services’ by the first acting chair of NMV and ‘Hopes for the future of MVPs’ by the first elected chair of NMV Council.  The event was summed up with final thoughts from some key Maternity Transformation Programme (MTP) staff voices, alongside a service user voice.

Here is the final agenda of the Summit:

Below are video clips of 4 of the presentations from the Summit, to give you a flavour of some of the incredible work MVP chairs have been coproducing within their multidisciplinary teams in the last year.

Rosie MVP (Cambridge) becoming an MNVP to include neonatal voices

MVP chairs up and down the country worked in creative and innovate ways to hear all voices despite the challenges of the pandemic restrictions and lockdowns, and they continue to do so with passion and commitment. The Maternity & Neonatal Summit in March captured a sense of these in many ways.