If you know anything about Maternity Voices Partnerships, you will know that co-production (also known as co-creation) is their bread and butter – that is: involving people that use maternity services in the design, development and evaluation of those services. Then it will be no surprise that lots of MVP chairs were in attendance at the Co-creating welfare Summit that took place in Coventry last month. Here is a round up of the event from some of the National Maternity Voices committee who were lucky enough to be in the room!

This was organised by two academics as part of an Erasmus+ ‘Co-creating Welfare’ project. Researchers across Europe have been engaged in cocreation projects in a variety of subjects and analysed what helps and hinders. They have developed a set of tools which will be available on the Co-Creating Welfare website once the project finishes in July. These resources are free to use but must be credited to Co-Creating Welfare.

There was a training course which was attended by a number of NHS people including some from maternity voices. Lisa Ramsey (user voice champion in maternity) spoke with two colleagues from the NHS ‘Always events’ team about how they had been using cocreation to work out what was important to patients & families.  Lisa explained how she had used blank slides in a webinar to do cocreation remotely. They are now planning to disseminate the information in NHS England. Download the Co-creating: Always Events & Maternity Voice Partnerships presentation (21 MB PowerPoint).

Key requirements of co-creation (or co-production as it is more commonly called in the UK) include openness and willingness to take risks and participants having/ feeling they have an equal voice. The venue can impact on this – finding that space where every individual can use their power. The use of tools to facilitate this e.g. the Cube ensures that all have a voice, all engage in active listening and there is a shared understanding of issues, purpose and solutions. There is a notion of Collective Creativity – thinking of yourselves as a community in dialogue creating together. The role of the facilitator is key.

Sometimes it is easier to see what harms coproduction than what enhances it (What would doing it badly look like?)  It is important to involve people from the beginning. It is ok for things to be messy and unknown. It is also ok to be wrong at the beginning. There is not always an outcome, but there is always a process, which is iterative.

Conventional approaches where an individual or small group does something then gets feedback after a time can be quicker/less effort initially but be more expensive long term as major corrections are needed. In coproduction there is interdependence and the notion that together we make something stronger. The approach is summarised as ‘Co-define, co-design, co-refine’. 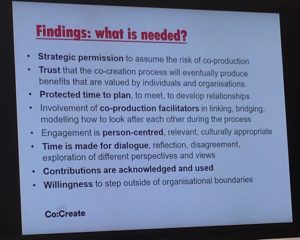 Louise Griew went into the commissioning workshop led by Morwenna Foden from Co:create. They have undertaken many projects with public bodies related to commissioning a variety of health and social services. A useful thing to consider is who can make or break a project.  The times projects have failed have generally been when senior management haven’t bought in to the process (see slide).

Morwenna recommended a book by Nancy Kline about the ‘Thinking Environment’ from which she took the idea that the quality of what you do is determined by the quality of the thinking beforehand, and the quality of thinking is determined by the environment.  See ground rules for a good environment.  This could be a useful checklist for MVPs. They highlight the value of a 5 to 1 ratio of appreciation to challenge. So often we focus on what needs to change and not what is working well. The process of ‘appreciative enquiry’ is a useful way of spreading good practice which is starting to be used by the NHS. 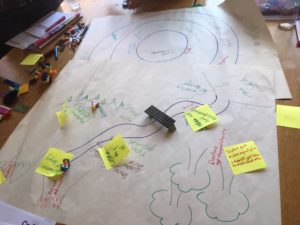 Later we tried out a stakeholder mapping exercise. Using post-its and/or lego to place stakeholders on metaphorical map in relation to a problem. Are they in the mountains/ pleasant pastures/ swamp/ woods/ being carried away down the river?  What are they saying/thinking? What resources do they have?

NB Lego is a popular medium for creative thinking and research shows it can help develop ideas in more depth.

Laura James attended a workshop run by Collaborative Poetics, which uses art and poetry as ways of gathering feedback. This particular workshop was looking at the theme of disability. 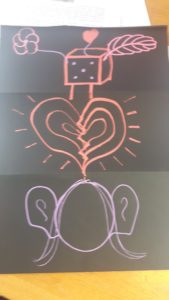 In the first activity, we were asked to each draw a part of a body in turn in an exercise called the Exquisite Corpse. None of us were able to see what had come before. We were encouraged to be as surreal as we wanted to and to think about the theme of disability as we did so.

The second activity was designing a seed poem. In a similar way to the Exquisite Cadaver, one delegate on each table was asked to write one word relating to disability, and fold the paper over. The next delegate was to read the word, then write a line incorporating that word. The paper was then passed to the next person and they continued the poem, only reading the line before. Finally the paper was passed back to person who had written the original word.

Next we were invited to write some spontaneous poetry based on our shoes. Each delegate was asked to say something about the shoes they were wearing that day. Having all shared stories, we were asked to write down a few lines about our thoughts and feelings, and share them with the group if we wanted to. The purpose of this activity was to share understanding and build group cohesion, as well as to reflect on the important message of the story.

Finally we were asked to write a data poem. Throughout the workshop, one of the facilitators had been making a note of the concepts and discussions that had been taking place. Delegates were invited to use these notes to create a final poem, which was in essence a summary of all the conversations we had had. These poems were extremely powerful and helped us really distill and interpret all we had heard that day.

Each of these activities really pushed many of the delegates out of their comfort zone, and personally felt very challenging. However, we were reminded that for some people, sitting down with a flip chart and some post it notes, or being asked to fill in an online survey, is equally as challenging and it was very powerful to experience that feeling as it forced us to relate to those who experience similar challenges every day. There was also a great sense of achievement at the end of the workshop, with some delegates remarking “I never knew I could do that”. A real testament to the phrase “learning happens outside your comfort zone”.

The workshop gave us a lot to reflect on, especially around how we can use some of these techniques in our feedback work with Maternity Voices Partnerships. They push the boundaries of traditional feedback gathering but it really opened my eyes to how feedback can be gathered in a different way. It was also a fantastic exercise in collaborative working. I came away reflecting on Gemma Pearce’s remarks in her introduction to the day: that co-creation is not always about the outcome, but it is always about the process. The challenge remains how we can promote this idea, in a system which is very outcome-focused, as an effective, powerful feedback mechanism.

In the afternoon Emily Ahmed who works in commissioning support talked about the process of ‘participatory appraisal’ where trained peer researchers go out to communities to discuss and analyse issues. They work in teams of 3 – a facilitator, an observer (note taker) and an ‘anti-saboteur’ who deals with disruptions like children or people getting upset.

It was agreed that a co-creation Network would be formed for England similar to the ones that exist in Wales and Scotland. 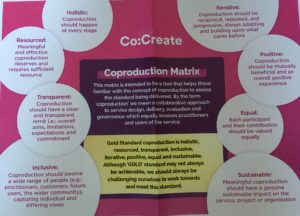 This image shows a way of evaluating the quality of cocreation which is a potentially useful tool. You can consider how consistently are these factors in place? This is free to use but Co:Create should be credited.

To find our more about the day, check out Co-Creating Welfare on Twitter or follow the hashtag for the event #CoCreatingWelfare.